Jelex stood atop the precipice, her trusty dog Nutmeg standing at her side. They had finally arrived. There hovering above the clouds in the middle of the valley sat the parthenon. The citadel of the reptile queen Medusa.
‘Well you two, we are finally hear.’ Talking aloud to what appeared to be a company of one, her dog.  A dog, that surely would no respond. Was she going to acknowledge herself? Did she really talk about herself in the third person.
‘We’re not there yet Jelex, let’s not get ahead of ourselves’ responded a tiny high pitched voice.

‘Get ahead of myself? Boy Felicity you are hard, we’ve been on the road for months, fought hobgoblins, kobolds, orcs and more, and you can’t even let me celebrate the little successes, like finally laying eyes on the reptile witches home.’ Jelex had not turned; there was no indicator as to who she could be talking to.
Here the warrior girl stood, looking at the parthenon, the wind flying up the cliff face blew her hair askew, flicking it back, her Left hand resting on the hilt of a Tonfa, while she subconsciously scratched behind the hounds ear. She looked every bit the Heroine that she was.
‘Ok’ whispered Jelex, and the hound Nutmeg burst forward, first running this way then that until she finally picked up a scent that she knew would lead them down into the valley.  It was the scent of the Bullfrog.
‘So Jelex, you’re not worried about meeting the Bullfrog are you?’ sung the tiny high pitched voice again.  What was that noise, was it really a voice? Of course it was, as Jelex and Nutmeg made there way down the thin narrow pathway that crossed the face of the cliff they had been standing on it was possible to see where the voice was coming from.
A tiny little human. This little human was dressed in green, brown and orange, different from that of Jelex who was dressed from head to toe in black, a black so black it was all the better to not be seen by.  This little human though, flying through the air, wings flapping at such a supersonic rate you’d have to have supersonic hearing to hear it.
‘Not really Felicity, I don’t think he could be all that bad.  In all the months we’ve been travelling we’ve not encountered him, nor have we seen or heard anything ill about him, not directly anyway.  There’s the rumours, but if those rumours were real, surely we would have seen evidence of his passing.’
‘Oh! I didn’t think of it that way.’ replied felicity, buzzing in close to Jelex’s alighting on her shoulder, grabbing at the strap of her travel satchel to stop herself from falling.
Jelex continued ‘You see also, if he was as dangerous as people say he is, I am sure we would have met him already. Instead, everytime we seemed to lose his trail we somehow found it again.  Like I know nutmeg is a good tracker, but really, that time we were at the flooded river and suddenly a ferryman turns up out of nowhere and takes us across the river for free, and puts us smack down where Nutmeg can find the bullfrog’s trail again. I am sure he was helping us.’
Nutmeg had stopped, the climb down the cliff face had come to an end, to mind you it was only 20 or 30 metres and the narrow trail was so steep it had been easier to run down it as a dog.  Jelex looked on as Nutmeg stood, looking excitedly into the forest at the base of the cliff, one leg raised, as if she was pointing the way Jelex needed to go.
‘But that doesn’t necessarily make him good, maybe; just maybe he has been luring us to a trap.’
‘Felicity, really, for a fairy you are terribly cynical.  If you think about it, and the quest we are on I actually think it is the Bullfrog that hired us.’
Felicity sat silently for a few moments, tying shoulder length hair back in a bun, having just spent five minutes un-knotting it, there was no way she wanted to get it tangled in her wings again. ‘What do you mean?’
‘Well look at the note, That’s not an ink splatter, that’s the Bullfrog’s palm print, his front left palm print from what I can tell.’ 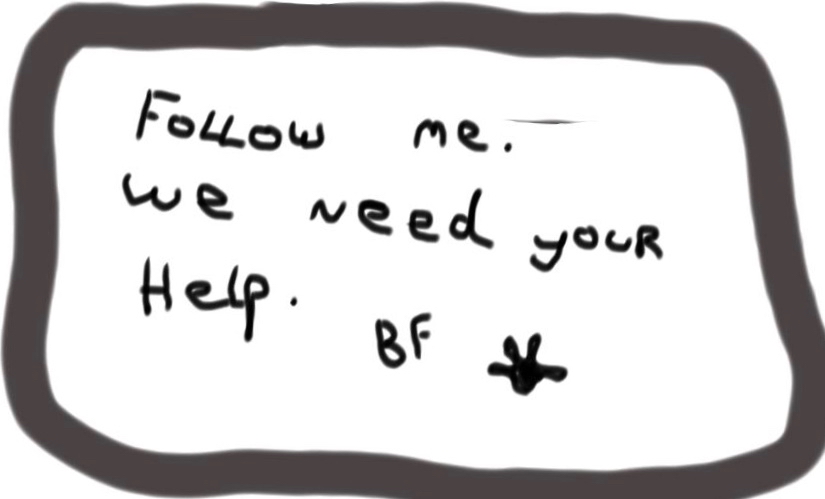 ‘You could have told me this earlier Jelex, I’ve been scared of the bullfrog all this time.  What you're saying is the note that bought us on this silly quest has actually been written by the bad guy that we have been pursuing all this time, and that you are now telling me that he is possibly the good guy.’
‘Yes.’ Jelex was bemused, yeah sure she could understand that Nutmeg did not get it when she read the note, but then nutmeg can’t read, but felicity, seriously.  ‘What did you think BF stood for?’
‘Best Friend! Who else would be asking us for help.’
Nutmeg had stopped on the track ahead of the two of them, her ears back, tail wagging and yapping. ‘It’s not dinner time yet Nutmeg.’ yet the dog did not change its attitude, only to walk back down the track and pokey nose her owner.
Then Jelex smelt it, her favourite meal, slow cooked pig on a spit. The sweet smell of BBQ and Tomato sauce basted pig. Most probably with some slow cooked potatoes, honeyed carrot and corn on the cob;  it smelt devine. No wonder Nutmeg wanted some dinner.
‘Shhh Nutmeg, no speaking.’ Jelex bent low, to hide behind the foliage of the forest and slowly moved forward. Not a sound, ‘Sit.’  sweeping an open hand over Nutmeg’s head the dog sat, quietly ‘Stay!’
Jelex sat still for a moment, quietly sniffing, moving her head this way and that trying to discern where the lovely smell was coming from. After a moment she moved forward, stealthily, as quiet as quiet could be.
Several minutes later, after crawling under fallen logs, over moss covered boulders and stopping several times to sniff again to confirm she was going the right way, Jelex was finally squating beneath a large forest fern. Its leaves hanging to form a umbrella to the ground.  So thick it was like being inside of a domed tent, except for the three inch thick trunk holding her dark little hidey hold in place.
Moving a palm frond ever so slightly Jelex peered out into a shaded clearing, brightly lit by three to four rays of sunlight reaching through the rain forests canopy above.
‘Come, Come Jelex, we have been expecting you.’ said a deep, detached voice from somewhere within the clearing.
‘No Jelex!’ pleaded felicity in an ever higher pitched urgently whispered plea.
‘It’ll be ok. Felicity, he’s safe, I told you that!’ Jelex stepped out from beneath the palm, her pupils only partially adjusted to the light contracted with the brightness of the rays for only a short moment, a moment Jelex would not normally have let happen. To be blinded like this in the presence of an enemy would be disastrous, for some reason though she did not feel that now.  “Who are you?’
‘Welcome, welcome. Do please have a seat.’
Jelex was amazed, to the left of what she could see from under the palm was a large square table, with 8 chairs arranged around it, 2 on each side, all bar one occupied. To the right there was a small quaint Cottage. ‘Who are you?’
‘Sit, sit, please, then we will do the introductions.  Also can you please whistle your poor dog, I can hear her salivating at the smell of our meal from here.’
Jelex walked towards the one free chair at the table and sat, dumbfounded at what was around her. Immediately to her left and continuing around the table sat a group of humanoids she had never seen.  A Stone Gollum, a Mountain Giant, a Wood Elf, A Hill Dwarf, a Halfling, a balding human cleric, and a large frog.
‘We welcome you Jelex, daughter of Ruthdrew, Ninja Warrior of the West, our Dancing queen. You are our guest this evening.’ It was the Frog's voice she had heard, it was the frog who was speaking to her right. ‘We are the council of seven, and it is we who have asked you hear today.’
‘May I ask why I am here?’ Looking at each council member in turn, all of them silent and still.  Not a clue of emotion on any of their faces; all of them though held her gaze with confidence, they did not fear her, nor did they intend to harm her, she could see that.
‘We can talk to that during and after our meal.  Let the meal begin.’ and he ribitted.
Suddenly the forest surrounding the clearing burst into life, a large roasting pig carried by two humans entered the clearing, another person had a tray of roasted potatoes, carrots and corn, and finally a fourth entered carrying a large earthen jug.
Having lived on trail rations for weeks the food in front of Jelex looked great, and as best she could she picked up the knife and fork that sat either side of her plate; a knife and fork that felt alien to her having been eating with her fingers forever.
Nutmeg appeared under the table resting her head in her masters lap, applying pressure so she knew she was there, pokey nosing her occasionally just to make sure.  Jelex slipped nutmeg a nice big pork knuckle and she was gone; away from the table and sitting down to munch on the bone.