'Ssssssss' then silence, and he existed.  Stickman Sam would be his name, and here he was, standing at the bottom left of a clean white lined page inside one of Jelex's first schoolbooks of the year.

Sam had been with Jelex since grade 1, they had been on many adventures together. Especially at the start of the year. When the books were new. New books meant opportunity. Where would Jelex's mind take him today?

Would Jelex write one of her fantastic stories, her lovely handwriting pulling a world out of her brain onto the page, or would it be numbers and mathematical symbols?

Or even better, would she sit during free time, her mind wandering and drawing, creating a landscape with snow-capped mountains he could ski down, jump off, landing in the small cabin at the bottom in front of the warm fire?
The book suddenly flipped shut. Nothing.

Sam stood alone, quietly.  A little sad but confident Jelex would return, and he would get his adventure, he knew it. He'd just have to wait.

Suddenly a light shone in waking Sam, the book was open. Here we go thought Sam.  Looking up from the page, he waited. Then he saw it, the Hand holding the black pencil, he loved the black-led
, he watched as it pressed down on the page.

WAIT! What's that? That's not the words of a story, that's not maths, that is a MONSTER! What, who is this, Jelex had never drawn a monster before.

The beast looked at him, all black and spikey, two spindly legs, googly eyes. The Hand was gone. 'GRRRRRR!' It had spotted him and was starting to walk towards him, growling and slobbering.

Thinking quickly, Sam jumped up from the bottom of the page onto one of the writing lines. Pulling himself up onto the line just as the Monster leapt towards him snapping its jaw shut, just missing his foot.

He had to do something. Running along the line to the far end, he hooked his legs over the edge and hung upside down. He quickly drew a line between him and the Monster.

The Monster growling turned and ran as fast as it could towards Sam, straight into the line, bouncing off and landing on its butt. Stunned.

Acting as fast as he could, Sam quickly drew a box around the Monster. He coloured in, leaving a sweet hole in the top so it could breathe. The Monster's googly eyes protruded from the box; watching him.

The Hand was back; it drew two more boxes butt up against the big black box, one smaller than the other, just like steps.  Then from the top of the Monsters box, it drew a ladder that climbed the page.

Sam shrugged his shoulders, 'Guess I should climb. He took two massive leaps up the box stairs. Jumped over the Monster onto the ladder and started climbing. The Hand drew a platform at, Sam climbed onto it and looked around, he waited.

The Hand was back. Now it was doing block letters. First the outline of a capital 'D', then 'O', 'U' and a 'G'. 'DOUG' the word rattled around Sam's head. This wasn't Jelex. Who is this, Doug? 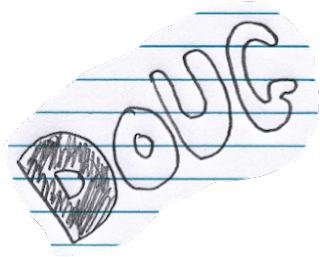 The Hand was moving again, way down the bottom of the page, drawing a bucket. Filling it with water and colouring it blue. Did the Hand really expect Sam to jump off the platform ten lines above the bucket of water?

The Hand was back, this time with an eraser. Sam hated the eraser, it was like carpet burn starting at his head. RUB, RUB RUB, his head gone, shoulders, arms, body and legs, Sam was gone.

'Ssssss' Sam was back. This time though he was upside down, arms stretched towards the bottom of the page, towards the bucket. Yep, Doug wanted him to dive into the bucket and had drawn this. Sam had no choice now but to let gravity do its job.

SPLASH! Sam bobbed to the surface and took a breath. Climbing out of the bucket of water, he jumped up and down to get the water off. Then he stood still to drip dry. What next, what would Doug draw next?

He heard it before he saw it, the drone of an engine first followed by a whistle, then a 'KABOOM!' Running Sam looked up the page to see what was going on.  Quickly vaulting up the boxes, over the eyes and onto the ladder again.  Sam climbed to the platform as fast as he could. 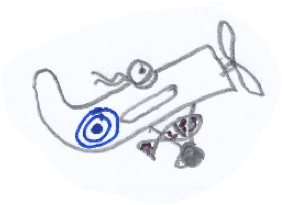 Once he was on the platform, he quickly drew a ball gun, looked down the barrel to line it up on the plane that he could now not only hear but also see as it flew around.

'Thoomp, Thoomp, Thoomp!' he fired three basketballs at the plane as it flew up past the platform. 'Thump!' He hit it, the engine noise, initially a droll 'RRRRRRR' turned into a whirling, whining noise as the wing he just hit flew off. With a sense of relief, he watched as the plane crashed to the bottom of the page, only its tail left visible from the wreckage.

This was all happening so fast. Sam was not really used to this; usually, Jelex drew beautiful scenes, trees, birds, mountains. Yes, it was hard, and he got puffed climbing mountains and skiing down them, it was nothing like trying to survive Doug's page.

Doug's Hand was returning, Sam froze on the platform. What could he possibly draw that could be worse than everything that happened already.  As Doug took his Hand away, he spotted it. There standing on top of the Letter G was a Stickman Ninja.

Sam had to really think quickly now. He ran and dove from the platform. He'd done it once already, so there was no harm in diving into the water a second time. 'SPLASH!' He quickly climbed out of the bucket, leapt over the crater and ran towards one of the Basketball's resting on the ground.

He could not hear anything, yet he knew the Ninja was moving, he dare not turn to look, to try and see where it was. He needed to get to the Basketball. Skidding to a stop. Sam picked up the ball and quickly looked to where he had just come from, looking for the Ninja.

It landed silently squatting its black head with the white slits for its eyes lifting to look at him. Sam, with all of his might, threw the Basketball at the Ninja; he watched as the Ninja silently, gracefully leapt into the air as the ball approached. Breaking the silence a loud 'KEEE YAAAH!' the Ninja bought its foot down hard against the ball, kicking it so hard it made a loud THUMP as it bounced off the bottom of the page and flew so fast up the page that it was invisible.

The Ninja landed again, coiling itself ready to spring towards Sam and Karate chop his head, as it had done to the Basketball. Then it happened, 'Thwunk!' the Basketball that had shot so fast up the page had returned bouncing on the Ninja's head and knocking it unconscious. 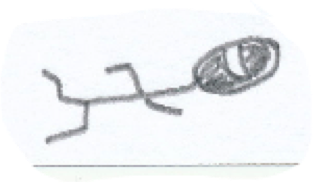 Sam stood looking at the crumpled body as the ball bounced back up the page, somewhat slower and lower this time. His heart thumping in his stick body,  breathing heavily. Sam tried to calm himself.
This was ridiculous, there was no way he could keep this up. If Doug came back with another challenge, Sam was worried that he may not have the imagination or the energy to fend off another dastardly drawing. Then he heard it!

A ripping sound, looking up Sam saw the fold in the paper. The noise the page was being ripped from the book.  If he did not get out now, he was doomed. It was the trash for him, and he did not know if he would ever get back to Jelex.

He did the only thing he knew; he quickly drew a hole. He'd heard about escape holes before, but this was the first time he ever had to use one. Hoping this was not the end; he jumped in. Darkness, silence, nothing, he was gone.

'Ssssssss' then silence, and he existed.  Stickman Sam would be his name, and here he was, standing at the bottom left of a clean white page.