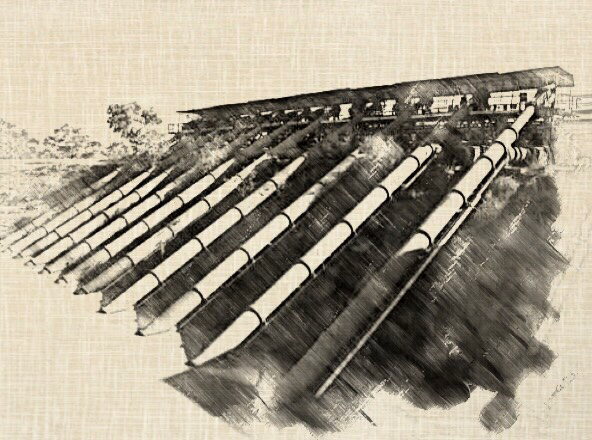 ‘Fuck that mate, I am not going down there. Over.’
Jack stood atop the pumping station. Pump seven had been screaming when he came across it.  He’d had stopped all the pumps, once he had seen what was causing the issue with pump seven.

‘You have to mate, the flow will take it away, Over.’
‘What flow, we’ve been sucking mud for days, weeks even, he won’t go far. Over’
He watched as the body drifted away from the intake by the backwash. Having killed the pumps for the first time in weeks, it would be a swirling pool of mud for a few minutes before everything settled. Despite this though he was confident the body was going nowhere as the river was near dry; barely a foot deep with the exception of the hole that had been dredged for the pump intakes.
That is what had Jack stumped. ‘You called the cops? Over.’
‘On their way, prob 20 minutes to get out to you. Over.’
‘Roger.’
So how did it get sucked up into the pipe? Turning away from the water, walking the length of the pump deck he slowly scanned the floor and each pump individually as he passed them.  Looking for anything that might tell him what had happened.
He knew that pump seven had shut down automatically several times overnight. Ian who had been on watch overnight and was now on the other end of the radio had restarted it remotely each time.  After a while, he deduced it was simply tripping out because of the sludge, then eventually overridden the control trip entirely.
They were under strict instructions to pump as much as they could; until the pumps were sucking mud only.
Moving back towards pump seven he stood back on the farthest side from the water, telling himself he was doing this to try and get a broader perspective. Knowing he was lying to himself, he did not want to see the body again.
Everything was silent, when he’d killed the pumps he’d been surprised by the silence, it was if the birds, insects everything had stopped out of fear, out of an unnerving worry at the silence of the pumps.
Or was it because of death? He’d heard from some old Cow Cockeys at how quiet the bush could get when you found yourself alone with a dead man.
Then he realised, the emergency stop on pump seven, the glass was smashed, the red stop button exposed. He’d been down here a week ago to do a quick walkthrough, and it definitely wasn’t broken then.
He heard the noise of a car travelling along the boundary line, looking up he could see the plume of dust billowing out from behind a white Toyota, Landcruiser, Police wrote in large blue down its side and a set of patrol lights on top.
No siren lights off. It’d be Bob for sure, thank fuck for that; and not that cocky young city bloke, he’d be out here all piss and wind, siren blaring, lights flashing. Bob knew better, and old country cop, he knew there was no need to rush for the dead, they weren’t going anywhere.
Jack stepped down from the pump deck and waited. Watching as the car came to a halt, engine killed. Bob stepped out of the car and stuck his blue Akubra on his balding head. ‘Jack.’
‘Bob’
‘What’s the story mate, Ian told me you’ve got a body?’
‘Yeah, can’t work it out.’
Turning Jack lead the way back onto the pump deck, walking past the silent bank of pumps, stopping between pump six and seven. ‘Down there, it’s drifted out a bit, but it’s not going anywhere.’
‘Anything else?’
‘I think they might have been dickin around with the pump. Kill switch is exposed, they would have to have smashed it to hit it. Ian told me it kept getting triggered overnight.’
‘So what, you think they came to dick around with the pumps.’
‘Bob, seriously I don’t know, no car or anything. I’ve not walked the river banks, maybe it’s someone from down river, they’ve been getting more and more agro with us because of these bloody pumps.’
‘So what you reckon he’s fallen down there, an accident?’
‘I don’t know mate, I’ll leave that to you to work out.’
‘Alright then.  You isolated the pumps?’
‘Give me five.’ Jack turned away, he didn’t need an answer from Bob. He walked off the pump deck, pulling his keys out of his pocket, juggling them as he found the one he needed.
Ducking under the floor, he squatted in front of the mains board, unlocked it, lifted the lid. Tripped the red master, and then just to be safe tripped all the individual safety switches for the pumps.
Bob was standing at the edge of the deck when he came out from underneath. ‘All isolated mate, it’s all yours I’m going to head back up the house.’
‘All right, don’t you and Ian go anywhere, I’m going to want to talk.’
Nodding, Jack turned toward the Hilux, head hung. It was only 7am, he’d been awake for less than two hours, and yet he felt exhausted.
‘Hey, Jack!’
Stopping, hand clasping the door handle of the car, he looked back toward Bob.
‘He stopped the pumps.’
‘He sure did Bob. He sure did.’
Posted by Andrew Friar at 22:08