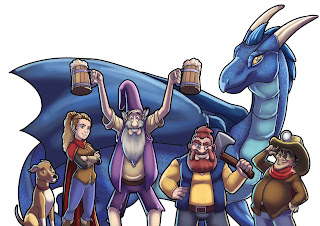 A friend and colleague today asked me, where do I get my ideas from. Then promptly got crook and raced off to the doctors. So I thought I would give them something to read by pointing out the backstories on the characters from the banner.


Let’s call them ‘The Party’ as once I had this artwork done, I decided they all need to be in one story together sometime in the future.
I will describe each in two parts, where they have come from, and where, just were may they go.
Starting from left to right, Humans first of course:
Jelex– is a character based upon my two daughters, she first appeared in ‘The case of the missing Tooth!’ and has subsequently appeared a myriad of storiesfrom getting trapped in Mine craft with her motherthrough to becoming the Tonfa wielding hero she is today.
Longer-term as my daughters are she will grow into a heroine with excellent martial arts (Ju Jitsu) skills combined with the agility of a dancer, intelligence of an academic and drive of an entrepreneur, traits my daughters have.
Nutmeg– The dog, our dog. The ever-reliable, super intelligent and loyal companion of Jelex. She has been beside Jelex on all of her adventures so far and is a great friend of the Bumchin.
All sorts of things could happen with nutmeg in the future, she could gain magical powers, prove her skills as an escape artist, early warning system and more.
Andrut the ale mage– What would a party be without a mage.  The name, simply derived from Andrew andRuth his ale is his magic.  He has only made an appearance once so far in ‘Dice Day 2 – the Ale Mage’.
Andrut will be an exceptionally understated fellow, as per all good mages he’ll most probably have some Merlinesque skills combined with the mysterious nature of Gandalf the grey.  Side stories, back stories, circular stories and more.  Naturally, of course, he will be significant support for Jelex and the gang in their adventures.
Bobmadik– Now this guy has a long history, he, in fact, has been around for 30 odd years personally, i.e. he was a character I used in my days playing Dungeons and Dragons with a few mates called Mick.  On this site alone you can find:
·     Dwarvelf
o  Chapter 1 - Shattered
o  Chapter 2 – What Now?
o  Chapter 3 – Durog’s farm
·     2017 – Day 3 – Fatal Mistake
·     2017 – Day 15 – The other perspective
·     2017 – Day 18 - Dalgroth
·     2018 – Day 13 – Dawn
·     2018 – Day 30 – Dawn’s Perspective
If you read Chapter 1 (and other stories linked above), you will find that Bobmadik is married to Taesha and Aelen.  Obviously there is a lot here, for example, the idea to Dwarvelf is a 20 chapter Novella.  Of course, all of this earlier writing is in the theme of ‘One Draft,’ i.e. I am putting it up there straight, with little editing, that will occur later as I work things out.
Mr Bumchin– The accidental character of the group – worth reading his back story in the 2018 – Day 7 – Tunnel Cubby.
This fellow is a little understated, bit rotund, yet surprising in all sorts of ways. In all of the characters above, it’s probably ‘Ol Bumchin that has me toying with an idea of writing some adventures of this motley crew.
Dawn– the last but not the least.  She made her first appearance on Day 13 of last the 2018 ‘Story a Day’. To be honest – we have seen nothing from her yet.  Watch this space.
·     2018 – Day 13 – Dawn
·     2018 – Day 30 – Dawn’s Perspective


So that’s ‘The Party’ in brief. Just maybe, this month I’ll start to wrap a story around them all.
Posted by Andrew Friar at 22:24