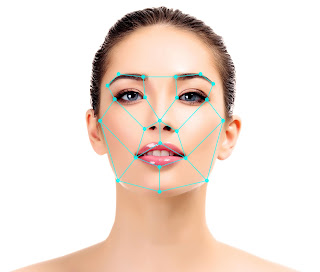 The unregistered laid out her wares on a six by six blue canvas. There were rubber masks, trench coats with and without shoulder pads, shoes with 4-inch heels, wigs, glasses; a veritable array of items used to disguise or distort.
Of most interest on the canvas were the new headbands. These circles that an individual wears above their eyebrows projects a digital distortion feed, preventing the facial recognition technology to identify and track a person's movement.


None of this was of interest to Eric, not the unregistered, not her wares. It was her customers that he was tasked with photographing.  As a freelance paparazzi, he had found a lucrative way to make a bit of extra cash. The Office of personnel paid good money for these photos.
He'd already taken a photo of the street signs, the shop front the unregistered was in front of as well as a photo of the unregistered. This was like the metadata required by the Office; they would pay extra for this detail.
The unregistered was doing well. Standing five foot four tall, she was unobtrusive and did not bring any attention to herself or her customers. It appeared that they already knew what they wanted when they approached her. There would be a very brief exchange before the customer would turn and leave.
Eric would get a shot of the customer as they both arrived to make their purchase when they departed and then a third of the canvas. He figured he could sell this detail for a bit more coin from the Office by providing them with a running inventory for them to work out what the individual had purchased.
After a little less than an hour, Eric approached her, the unregistered.
''Hey missy, how much for a halo?''
''For you, $100.''
Eric knew better than to argue, he knew she had seen him taking the photos and did not want her to bring attention to their exchange. He paid her the hundred, took the Halo she had held-up. Without a word, he turned and walked down towards the quay.
Finally, he had it all, he'd be able to make his way out of the city. Everything he needed to hide from the governments monitoring systems.
He knew he had not been photographed. As a Papp selling photos to the Office they would not suspect him, he could easily disguise and distort himself. And if he is quick, the face recognition would not be alerted by the Halo enabling him to make his getaway.
It was worth it, he had no qualms compromising all these poor suckers he had photographed, their freedom, their lives worth it if he manages to get out of this place.