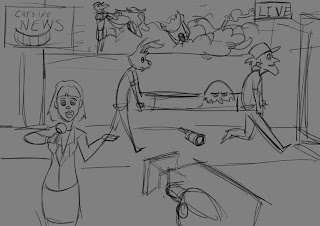 'Good Evening Viewers this is Alice Liddel from Wonderland News Corporation coming to you from downtown Rhymeville.  Today I am having to report upon a catastrophe for one of our most recognisable citizens, Humpty-Dumpty.'
'I am told HD had been out and about on the town with his pals for a leisurely lunch on this fine day, unfortunately that day has not ended well for him, as he has unfortunately fallen from a wall where we believe his friends had thought to leave him safely propped up while they went to get someone to help roll him home.'
'It appears that HD had over indulged in his preferred drink of Boiled Brandy & Ale often referred to as BBA.
'Note though it is not all bad news, it is reported that Humpty is not yet dead, there's a breadth of advisers about trying to solve this problem.  For all reports it appears this is not the first time it has happened.'
'Here in Rhymeville  where our population is pretty stable there are four-score men and three-score more who encountered such a situation back in 1797 and 1810 respectively.  Although scores of men where involved on both these occasions, neither of these groups succeeded in putting HD back together then.'
'It's also been reported by James Orchard Halliwell that Humpty-Dumpty had a fall into a beck in 1842. It's understandable my viewers that you may be curious as to what the heck is a beck? Well you see it's a stream and on this occasion it was reported that HD broke the sinews in his neck. In this report by James Halliwell forty doctors and forty wrights could not put humpty dumpty to right.  That aside though officials are asking if any of those doctors or wrights are watching the broadcast could they please get in touch.'
'Then again, over beyond the wall you will see all the kings horses and all the kings men milling about arguing over how to put Humpty together again, as they have been trying to succeed at this again and again.'
'So all in all everyone, it is pure chaos down here as catastrophe's such as this in Rhymesville are big news, we have horses and men milling about trying to work out just how to put Humpty together again.  This does look like it will take some time to resolve, and we will keep you informed of the developments throughout the night, now back to you Cheshire at Wonderland central'

The prompt from story-a-day was to write a News Story My source for this idea was the wikipedia page for Humpty Dumpty woth a squiz to see how I wove in the wikifacts.
'