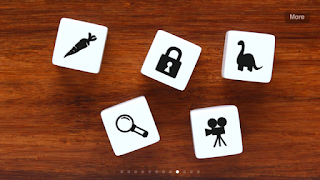 Breton the BRAK-ee-oh-sore-us stood back, in awe of his latest acquisition; a molded clear lockable cubed cabinet made of unbreakable glass.  He knew he had to have it as soon as he saw it advertised at the Bedrock drive-inn a few days earlier. 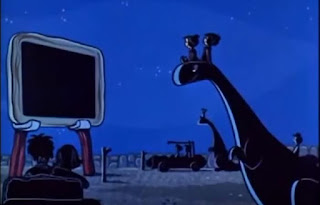 Indestructible they said.  A secure way to keep your treasures safe and still have the enjoyment of seeing them without the risk of someone stealing or simply carelessly loosing them, and Breton knew exactly what he was going to put in it.  His most prized treasure, the one material thing that was most valuable to him.  Unfortunately though, not to him alone.
There was some downside though, the molded clear lockable cubed cabinet had turned up as expected within 24 hours.  the seel-OH-fie-sis courier service was tremendous, he always liked using them. Making sure he was never home when they arrived of course.
He knew through experience he had to avoid the little blighters at delivery time. You know the type. Great a transporting stuff, abysmal at delivering without trying to eat you; being carnivorous and all.
Back to the downside though. Breton lived in a paddock, yeah sure he had it to himself, all the BRAK-ee-oh-sore-us who worked at the mine had their own space. Problem though, is all of them could see where he had stuck his treasure, you know, it being a molded clear lockable cubed cabinet and all.
So here he was, in awe, the golden orange glow of his treasure emanating from the molded clear lockable cubed cabinet, lighting up his whole paddock, and both paddock's either side of him.  He'd already headbutted Bert because he was fogging up the glass he was salivating and snorting so close to his treasure.
So in awe, yet so anxious.  Yeah sure it had a lock, but it wasn't enough, he had already ordered a knew super kryptonite lock, the lock of all locks. Again he'd used the Seel-Oh-fie-sis couriers to make sure he got it as fast as possible.  Only problem was now, he was so anxious he would not be able to sleep.
As the afternoon turned to evening. The setting sun disappearing over the horizon only to be replaced by a slither of a new moon that barely cast any light, the glow of his treasure becoming brighter and brighter as the night came on.
He'd been here for hours. After Bert's sobbing had stopped only to be replaced by his snoring and snorting; Breton still sat watching his treasure.  Worrying, knowing it's radiance and glow would attract thieves from everywhere.
His joy and exuberance at the new molded clear lockable cubed cabinet diminishing by the minute, instead of being curled up in a bed of hay, tail wrapped around his head and shoulders, his muzzle buried into his belly for warmth, he was sitting here watching, no guarding his precious treasure.
A treasure that just the night before had been safely his own secret hidden under his exercise rock nonchalantly thrown in the corner. Giving any wanna be thief the idea that it was simply a discarded rock in a a paddock and not the safe and secure hi-D-hole he knew it to be.
As time went on Breton felt his eyelids getting heavy, several times his head started slowly give into the lure of the ground. Jolting awake Breton would stand, prance around a little.  He could not sleep he simply had to wait for daylight; wait for the Seel-Oh-fie-sis to arrive with his new lock.
'Bwe-OOOH-ee-OOOH'
Breton sat bolt upright, shocked, he'd fallen asleep. He did not know when, nor for how long, but he knew he had slept.
To his shock and horror the molded clear lockable cabinet was gone, that and the treasure within it.  It was no where to be seen. He ran to look at Bert; always able to sleep through the alarm he was still snoring and snorting away.
Oh no what was he to do? Then he saw his answer. Ignacio's the ig-WHA-noh-don was walking up the pathway, one eye shut, squinting through his magnifying glass reading the morning checklist on his way to the office.
Breton, jumped, pranced and grunted to get Ignacio to notice him.
'Ignacio! Ignacio!'
'Oh Breton 'ol chap, how are you on this fine day?'
'Not so good, horrible actually, my pride and joy, my treasure has been stolen!'
'What, that carrot you're always coveting, the one you keep under your weight rock?'
'Yes, yes, that one. Someone has stolen it.'
'Let me see here laddy, let me have a look.'
'What you mean use your magnifying glass to look for clue's?'
'No Breton, that won't be necessary, look there' gesturing with his magnifying glass Ignacio gestured towards the far side of Breton's paddock.
'What are you talking about I can't see anything?'
'Look again boy, look again. It's scuff marks; and oh wait some foot prints.  I know who your, or what took your carrot.'
'Who? What? tell me, tell me, will be be able to get it back.'
'I'm sorry Breton, your carrot is most definitely gone for good.  Those marks there, they are from a MegaKanga, one of those lay about Australians. One of those megafauna. Oh I don't like them, they think they are so much better than us, furry hippy island dwellers.  They will have eaten the carrot already, and any other veggies they can lay their hands on.'
'Oh.' Breton felt ill, there was no way he was going to be able to work today, his feeling of loss overwhelming him, his fatigue from a sleepless night weighing him down. 'Thank you Ignacio.'
'Sorry Breton. You'll be right 'ol Chap.'
Breton simply turned, walked over to his straw bed, lay down and shut his eyes. a lone tear running down his cheek. 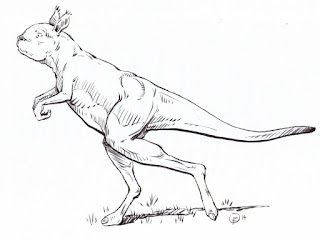 References for pictures today:
- Story Dice from https://thinkamingo.com/
- Movie Scene - Snipped from a Flintstones vid at https://www.youtube.com/watch?v=59HPf5zTWmg
- Dinosaur Phonetics & Images (below) from http://www.nhm.ac.uk/discover/dino-directory/name/c/list.html
- MegaFauna from - https://www.independent.co.uk/news/science/australia-animals-extinct-megafauna-two-tonne-wombats-giant-kangaroos-wiped-out-by-humans-a7537156.html